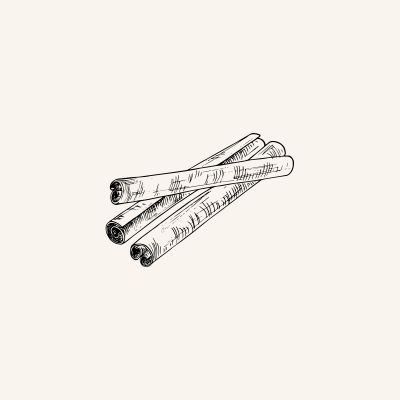 Cinnamon has a long history of use as a culinary spice in many cultures, being sought after in sweet and savoury dishes alike such as breads, cakes and curries. In ancient times cooks relied on spices such as cinnamon to preserve or disguise bad meat and to prevent food spoiling. It was used in Egypt for embalming, and during the Bubonic Plague sponges were soaked in cinnamon and cloves and placed in sick rooms. It has also been burned as incense. In addition to its culinary uses, in native Ayurvedic medicine cinnamon is considered a remedy for respiratory, digestive and gynaecological ailments. Cinnamon’s history as a medicinal plant goes as far back as the Ancient Egyptians and it was included in Chinese medical texts four thousand years ago for heart problems, influenza, digestive and urinary problems. During the explorations of the fifteenth and sixteenth centuries cinnamon was a highly sought-after spice. The Portuguese found cinnamon trees growing in Sri Lanka (Ceylon) in the early 16th century and they subsequently imported cinnamon to Europe during the 16th and 17th centuries. The Dutch occupied Sri Lanka in the mid17th century until the British captured the island in 1796. As its availability across Europe increased it was then adopted by herbalists for medicinal uses. It was traditionally used as a warming, flavouring agent (adjuvant) and digestive tonic. Its astringent action has made it useful in cases of diarrhoea. It was also used for rheumatism and menstrual disorders such as menorrhagia. Germany’s Commission E approves cinnamon for appetite loss, dyspeptic complaints such a mild, spastic conditions of the gastrointestinal tract, bloating and flatulence [1].