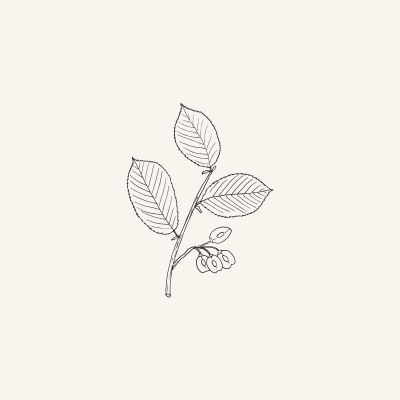 No food or drug of today comes close to matching the place of honour that slippery elm held in 18th and 19th century America. The herb was the nation’s leading home remedy for anything in need of soothing. An Eclectic physician Dr Beach reported the numerous uses by Native Americans and declared that “in point of utility, it is of far more value than its weight in gold”. Its name refers to the slippery consistency the inner bark assumes when it is chewed or mixed with water. This property is responsible for the name used by the Iroquois Indians, do-hoosh-ah, which literally means “it slips.” They used it as an eyewash for sore eyes. The Menomini Indians used the inner bark in a tea and it was taken as a purgative. It was used by the Menomini and the Meskwaki in a poultice to heal sores on the body. The fresh inner bark was boiled and the Dakota, Omaha-Ponca and other tribes drank the resulting decoction as a laxative. The indigenous people taught some of these uses to early non-Indian settlers. Native American women inserted slippery elm sticks to induce abortion and settler women adopted the practice which caused many deaths from uterine infection and haemorrhage. As a result, several state legislatures passed laws forbidding the sale of slippery elm bark in pieces longer than one and a half inches (3.8cm).4,5,6,7,8

Slippery elm has traditionally been used for a range of ailments, particularly in relation to the mucous membranes, digestive and urinary systems. The highly demulcent and soothing action of the mucilage was employed in the treatment of stomach ulcers, pain, reflux, diarrhoea and colitis. Slippery elm was also used for coughs and sore throats, having a soothing, antitussive and reflex demulcent action. The reflex action of the mucilage on the mucous membranes of the genitourinary tract meant the herb was also useful in cases of cystitis and bladder irritation. Topical applications of the powdered inner bark were traditionally used to help heal and soothe skin ulcers, burns, wounds and boils. Slippery elm was used, to much benefit, for gangrenous wounds as an excellent antiseptic poultice. It gained a reputation as an effective wound healer among soldiers during the American Civil War. The herb also has a bulk laxative action and was valuable in providing nutrition during convalescence. Slippery elm is an ingredient of Essiac, a herbal formula popularised by a Canadian nurse, Rene Caisse, in the early 1920s and used ever since to assist cancer patients. While anecdotal reports suggest that this combination formulation has anticancer activity, reliable clinical trials are lacking that prove or disprove this use. Slippery elm was taken before festivities to avoid “hangover” and before travelling to avoid travel sickness. It was also used during convalescence, such as cachexia (wasting syndrome) and other wasting diseases Slippery Elm (Ulmus rubra Muhl.) 2 of 3 Slippery Elm (Ulmus rubra) full monograph such as cancer, to increase body weight. It has been used for vaginitis and the vaginal mucosal membranes by coating some of the powder on a tampon and inserting into the vagina.9,10,11,12

Slippery Elm is used in our Essiac Tea