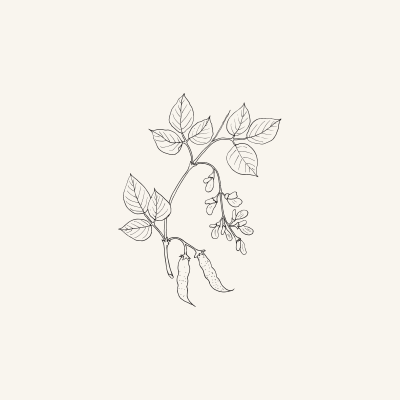 This is a legume native to the tropics, originating in southern China and eastern India. Also referred to as velvet bean, it has been used in the traditional Ayurvedic Medicine in India for thousands of years. In Ayurveda it has an affinity for tissues of the body which balance the nervous, reproductive, and digestive systems.

Mucuna, having anti-diabetic, anti-epileptic, anti-carcinogenic, antioxidant and anti-microbial activity, as well as neuro-protective, hypotensive, analgesic and anti-inflammatory properties, has been shown to have substantial medicinal importance. It supports a healthy nervous system, motor skills and coordination, and is a natural source of levodopa (L-dopa). L-dopa, the precursor to dopamine, is responsible for positive mood, the normal brain and nervous system functions which enhance intellect, promote enjoyment and support overall wellbeing. The L-dopa is also extracted from the seeds to provide commercial drugs for the treatment of Parkinson’s disease. [1]

Studies revealed the presence of substances that improve energy, endurance and support the body’s ability to handle physical and mental stress. Mucuna has clinical and scientifically established uses for the management of male infertility, and also as a powerful aphrodisiac bolstering libido and reinvigorating male and female reproductive systems [2].

Mucuna is used in our Sex Dust.