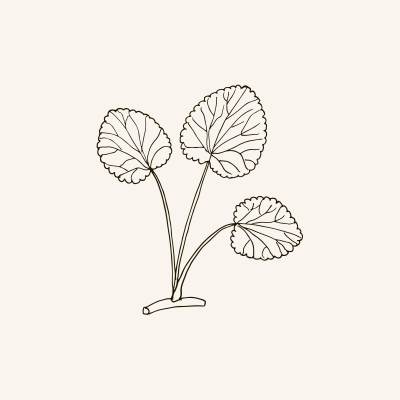 Gotu kola has been used as a medicinal herb for thousands of years in southeast Asian countries such as India, Sri Lanka and China. Historically it has been used as a medicine in the Ayurvedic tradition of India and is listed in the ancient Indian medical text Sushruta Samhita. In Ayurveda gotu kola is one of the main herbs for revitalizing the nerves and brain cells where it is an intellect promoting (medhaya rasayana) medicine. It was also used to treat asthma, bronchitis, oedema, gastric catarrh, kidney troubles, leprosy, vaginal discharge and skin diseases.

In China it is one of the reported ‘elixirs of a long life’ known over 2000 years ago and referred to in the ancient Chinese Shennong Herbal. Today gotu kola is well known as a universal panacea for promoting longevity and is almost as popular a runner as ginseng in the longevity stakes. This beguiling promise of longevity through cell regeneration is the herb’s main attraction.

Also known as Indian pennywort, gotu kola is recognised for its rapid healing and anti-inflammatory qualities and its ability to improve memory, anxiety and depression. It is one of the chief herbs for treating skin problems, varicose veins and to heal wounds. It is widely used as a blood purifier as well as for treating high blood pressure. Eastern healers relied on gotu kola to treat emotional disorders, such as depression, that were thought to be rooted in physical problems. It is used to assist meditation by producing a calming effect on the mind. The British Herbal Pharmacopoeia reports the systemic use of the aerial part of gotu kola in rheumatic conditions and cutaneous affections with topical application for indolent wounds, leprous ulcers and healing after surgery.

When the ‘doctrine of signatures’ (some visible or other clue that indicates a plant’s therapeutic use) is considered the leaf looks very much like the human brain, particularly the cerebellum portion, bringing to attention the mind strengthening and cognitive supportive aspects of this herb. In Sri Lanka, where it is known as the secret of perpetual youth, gotu kola has been a staple in many households for generations. It is served crushed in a salad, or sambol, to accompany rice and curry or as a popular breakfast porridge known as kola (which means leaf and green in Sinhala) kanda, a nutritious mix of red rice, fresh coconut, Allium sativum (garlic), salt and Piper nigrum (pepper) and a blend of green leaves. It is used for general wellbeing and is especially beneficial for the sick, elderly or arthritic. In fact a Sri Lankan legend has it that people observed elephants, an animal renowned for its longevity, eating wild growing gotu kola and decided to try it themselves thus discovering the plant’s medicinal properties and giving credence to the saying ‘to have a memory like an elephant’. This led to the Sinhalese proverb, ‘two leaves a day keep old age away’. Eating a few leaves daily is thought to strengthen and revitalise worn out bodies and brains. In more recent times it has acquired a reputation as an aphrodisiac.

In her 1930s book, A Modern Herbal, Maud Grieve calls gotu kola by its current synonym Hydrocotyle asiatica and says it is: “A valuable medicine for its diuretic properties; has long been used in India as an aperient (to relieve constipation) or alterative tonic, useful in fever and bowel complaints and a noted remedy for leprosy, rheumatism and ichthyosis; employed as a poultice for syphilitic ulcers.

Gotu Kola is used in our Energy and Meditation Tea.