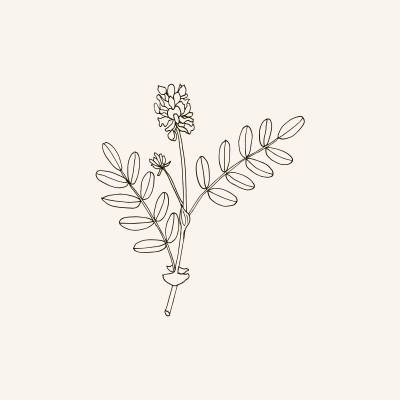 Astragalus was first recorded in the Traditional Chinese Medicine (TCM) classic Shen Nong’s Materia Medica about two thousand years ago. This text is the foundation of TCM and within it herbs were arranged by type of material (herb, tree, etc), and then graded into categories of potency: upper, middle and lower. Astragalus was listed in the highest class. It was believed to stimulate immune function and have antioxidant effects and other benefits in the treatment of viral infections and cardiovascular disease. It has been prescribed for centuries for general weakness, chronic illnesses, to increase overall vitality and as a tonic to build stamina. Astragalus is among the most popular and important Qi (energy) tonifying adaptogenic herbs in China which means it vitalises the non-specific immune defences and wards off infections. Ancient Chinese texts record the use of astragalus for tonifying the spleen, blood and Qi. It is considered to be a sweet tonic herb that is slightly warming. In TCM as well as being classified as a herb that tonifies the Qi it is indicated for symptoms of spleen Qi deficiency such as diarrhoea, fatigue and lack of appetite. It also raises the yang Qi of the spleen and stomach thus addressing prolapses of organs such as the uterus, stomach or anus. In this capacity it can also address uterine bleeding. Astragalus tonifies the lung Qi and is used in cases of frequent colds, spontaneous sweating and shortness of breath. Other traditional indications include wasting disorders, night sweats, chronic ulcerations and sores, numbness and paralysis of the limbs, and oedema (from deficiency). Astragalus is typically prescribed as a dried root as an additive to meal preparations, powdered or in a decoction however Western herbalists have started tincturing the root as well. Classically it is prescribed in combination with other Chinese medicinal herbs depending on the desired therapeutic effect and the specific TCM diagnosis. Although originally from China astragalus has quickly integrated itself into Western herbalism and is now one of the primary immune tonic herbs in the Western pharmacopoeia. It has demonstrated a wide range of potential therapeutic applications in immunodeficiency syndromes, as an adjunct cancer therapy and for its adaptogenic effect on the heart and kidneys. It has similar Qi strengthening properties to Panax ginseng but is less heating and stimulating. It is often said that those younger in years will benefit most from astragalus while those more seasoned with years may find ginseng more beneficial.

Astragalus is used in our Spark Dust and Spirit Dust