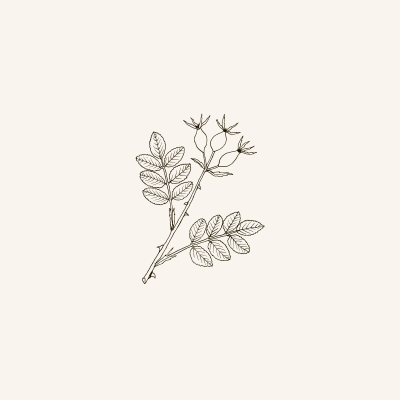 The botanical name is derived from the common name dog rose. The Roman naturalist Pliny attributed the name dog rose to a belief that the plant’s root could cure the bite of a mad dog. It is not clear if the dogs were rabid. Another theory is that it was the dag rose, dag being a dagger because of its great thorns, and like the dogwood (originally dagwood) became changed to dog by people who did not understand the allusion. The use of the dog rose in prescriptions dates back to Hippocrates (c. 460 – c. 370 BC) but precisely what for is unclear. As a medicinal plant it came into full bloom in World War II. When Britain was unable to import fresh citrus fruits the government organised the gathering of dog rose fruits, or hips, which were known to be a rich source of vitamin C. Processed into syrup the rose hips helped to prevent scurvy and still, today, the plant is valued as a rich source of vitamin C.4

Rose hips have been used traditionally to treat a range of conditions including diarrhoea, bladder infections and diabetes. In Europe and America, rose hips are processed widely into jam and juice, used as a vitamin C supplement, in cosmetics and as a folklore drug in the form of tisane.5

English herbalist Nicholas Culpeper (1600s) said that the ‘fruit of the wild briar, which are called hips, being thoroughly ripe, and made into a conserve with sugar, besides the pleasantness of taste, doth gently bind the belly…and helps digestion…being made into a powder and drank, to break the stone, to provoke urine when it is stopped, and to ease and help the colic’.6

In the classic book A Modern Herbal (1931), the first comprehensive encyclopaedia of herbs to appear since the days of Culpeper, the author Maude Grieve says the scarlet fruit or hip (named after the Anglo-Saxon word for hip, hiope) was esteemed for dessert in former times when garden fruit was scarce. Grieve says “another old writer says: Children with great delight eat the berries thereof when they are ripe and make chains and other pretty geegaws of the fruit; cooks and gentlewomen make tart and suchlike dishes for pleasure.’ She says the ‘confection of hips’ is astringent and considered strengthening to the stomach and useful in diarrhoea and dysentery, allaying thirst, and for its pectoral qualities good for coughs and spitting of blood.7

Rosehip is used in our Antioxidant, Immune, Ruby Rose and Women’s Wellness Tea.