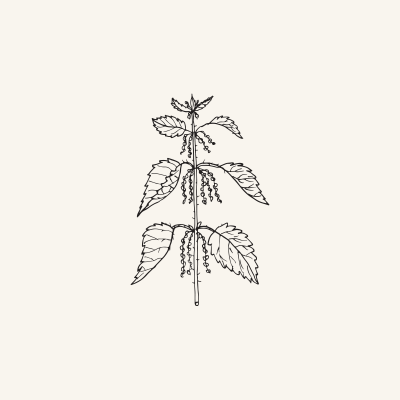 In many European cultures, nettle regularly crossed the bridge between being a food and a medicine. The young spring greens offered a mineral rich and pleasant tasting vegetable (similar to spinach) that was sort after by peasants and more noble classes alike. After long, harsh winters with a lack of greens, nettle was prized along with other greens such as dandelion as a ‘spring cure’. Many traditional recipes can be found for nettle salads, soups, pudding and beers. Nettle has also been used historically as a fibre (similar to flax or hemp) that was called upon particularly when shortages of cotton and other fibres occurred. Biodynamic farming also employs nettle as an important ingredient in composts. Nettles also support over 40 species of insects including colourful butterflies. The presence of the stings has allowed the relationship with numerous insect species to develop as the stinging hairs of the nettle were thought to have developed as a defence against grazing animals. A group in the UK working for wellbeing of people and wildlife has initiated a “Be Nice to Nettle Week” to raise awareness of this important plant’s role.1

In Western herbal medicine, nettle has traditionally been used as a tonic herb and recommended for complaints associated with rheumatoid arthritis, osteoarthritis and urinary tract infections. Being rich in minerals such as iron, nettle was used for lethargy and depleted states and recovery after childbirth. Nettle juice and lotion was thought to be a good tonic for the hair and scalp. ‘Urtication’ or flogging with nettles was a traditional remedy for chronic rheumatism and general muscle weakness.2 This has lead to modern research into the herbs action in respect to this. Its astringent action was employed in cases of bleeding, with Culpeper reporting it good for nose bleeds and bleeding of the mouth.3

Nettle is used in our Mother Nature and Cleansing Tea