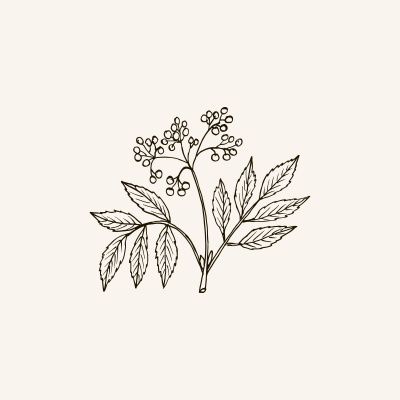 Various parts of the elder plant have been used for thousands of years by Native Americans and people of the Mediterranean basin and surrounding regions. Native Americans believed that elderberry would heal all illnesses anyone could ever have. They believed it would promote a long life, giving reason to the name elder. It has been used for medicinal and dietary applications by these and other ethnic, and cultural, groups dating back at least to the Ancient Egyptians. Prior to antibiotics elderberry was found as one of the main ingredients in many preparations used by herbalists, pharmacists and physicians. It continues to be commonly gathered as a food and medicine and, according to ethnobotanical research, is currently one of the most used medicinal plants worldwide where the berries are used primarily as antiviral agents for colds, influenza and Herpes virus infection. This monograph will focus on elderberries which are associated with a plethora of folklore, including links with witchcraft, and have been documented since ancient times. In 400 BCE Hippocrates referred to the elder tree as his “medicine chest.” Other noted classical healers, including Theophrastus, Dioscorides and Galen, regarded the elder as one of nature’s greatest healing plants. Elderberries are used in traditional German medicine for the treatment of constipation, to increase diuresis, as a diaphoretic in upper respiratory tract infections, for the alleviation of low back and/or neuropathic pain, headache and toothache. For treatment of these complaints patients consume elderberry juice, or they drink a cup of tea, several times per day. The infusion is prepared from 10g of dried berries standing in cold water for several minutes, then slowly heated up, and briefl y boiled. Before fi ltering, a drawing time of fi ve to 10 minutes is recommended. Elderberries, which have a higher antioxidant capacity than vitamin C or E, have been highly regarded in European folk medicine. In addition to colds they were also used for asthma, arthritis and constipation. For relieving symptoms of colds and fl u they were usually taken hot, with sugar, just before going to bed. Elder fl owers and elderberries have long been used in the English countryside for making many homemade drinks and preserves. The berries make an excellent homemade wine and winter cordial which improves with age. The word ‘elder’ comes from the Anglo-Saxon word aeld which means ‘fi re,’ so called because the hollow stems of the young branches were used for blowing onto a fi re to increase the burning. The generic name Sambucus is adapted from the Greek word Sambuca, the Sackbut, an ancient musical instrument in much use among the Romans. It is said elder wood was used in the construction of this instrument on account of its hardness.

Doctoring port wine with elderberry juice was a lucrative practice in the 1700s but as the berries possess valuable medicinal properties this adulteration had beneficial results. This was proven in curious circumstances. According to English herbalist Maud Grieve in 1899 an American sailor informed a physician in Prague that getting drunk on genuine, old, dark red port was a sure remedy for rheumatic pains. This observation started a long series of investigations ending in the discovery that while genuine port wine has practically no antineuralgic properties, the cheap stuff faked to resemble Elderberry (Sambucus nigra L.) 2 of 5 Elderberry (Sambucus nigra) full monograph tawny port by the addition of elderberry juice often banishes the pain of sciatica and other forms of neuralgia. Many tests were carried out by leading doctors in Prague, and by other centres abroad, resulting in cases of cure. The dose recommended was 30g of elderberry juice mixed with 10g of port wine. Incidentally Grieve dedicated the largest section of her classic 1930s book A Modern Herbal, the first comprehensive encyclopaedia of herbs to appear since the days of Culpeper (1600s), to elder.

Elderberries are used in our Antioxidant, Immune and Ruby Rose Tea.